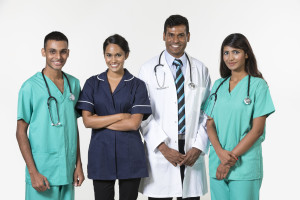 Cut down your expectations; Doctors are not God!

August 22nd, 2015 Posted by admin Current Affairs, Health 0 comments on “Cut down your expectations; Doctors are not God!”

Every time I meet people in the health care industry, they ask me why we (Gowtham and I) chose this space. They are of the view that this is tough industry, there are too many people fighting for the same piece of cake and getting a doctor’s time and attention is very challenging.

While there can be nothing further from the truth which I have got to experience firsthand, I have also pleasantly enjoyed every bit of it. It can get quite frustrating at times and the task is very demanding. But so is the case with every industry and every experiment that entrepreneurship is all about!

Literally living with doctors during the last six months has made me look at things from their view point. A few pointers…

Doctors study hard for their MBBS degrees and then they need to do a Post-Graduation in a specialty in order to practice. This means, by the time they finish their education, training and internship they are almost 30 and then it is a hard grind to name, fame and money for the next 10 years. They have seen their friends and school mates who do Engineering, Commerce or Arts streams earning fat salaries early on. This puts enormous psychological pressure on them.

Not much creativity in the medical profession

Many of us who have been creative during our early days have seen we are no longer so. It Is due to the demands of the workplace and also due to the professional choices we make. This makes life sometimes dull and monotonous. For doctors who see patients most of the time there is not much creativity that happens. Medicine is a field with a strong history of creativity, but its daily practice feels less and less so as mistakes are not tolerated. Health care is being pushed steadily toward standardization, insisting on an algorithmic approach to diagnosis and treatment. So if a doctor comes across as dull and boring don’t blame her/him.

We, the so-called professionals have been in the service industry and we know what it is like. So why assume doctors do something far different. Agreed! It is lives at stake and they need to be much more service oriented and display tons of empathy. At the end of the day, they are also humans having the same problems as we do.

The other day I was with a senior doctor who told me that he was performing a surgery and one of the patients waiting to see him was getting irritated that the doctor was not able to see him on time. He saw the doctor come out of the OT for a few min and asked him whether he was interested in seeing him, to which the doctor who was already exhausted said he will have to wait for a few more min. The guy again asked the doctor whether he was interested, to which the doctor who was at his wits end by now, said he was not. Another case was when I was following up with an Oncologist time and again. He got irritated and started yelling at me over the phone for no reason. Another incident was when I got a very irritated message from one of the doctors who was venting his frustrations on me. In both the cases, I apologized and did not utter a word in self-defense.

Doctors are highly emotional people and have large egos. This is because most of their lives people come to them seeking advice for their medical problems. So they always are in a seat of power. It is natural for anyone who is in this high pedestal to have a large ego. Recognize this fact. You and I would be no different if we are in their position.

In the present day and age, all of us work late. However not many of us work for 12 to 16 hours a day which is quite normal for a doctor. On top of it most of her/his time is filled with patients who are depressed and in pain. The other day I met an owner doctor of a hospital and he was expressing his pain to us. He also told us that we are all superfluous (useless). I could have walked out but chose to tell him firmly that we are doing something good for the industry and made a retreat. How can you expect a person who works this crazy not to get crazy when he sees you! Seriously…you must be joking J

Only two groups of people; the patient and the medical rep

We have many a time had to invariably wait for the doctor even after getting an appointment. While doctors do mind when their patients are kept waiting they do not care much for the others. For them everyone else is less important…and why not! The pharma industry have spoilt the doctors no end and with the so many vendors trying to get the doctors attention they tend to overlook everyone. And, why not? Look at ourselves; how many times have we been rude to an insurance agent or some other person on the phone who keeps selling something to us we may not want.

I must add here that the above points are not universal across the entire doctor population.

Having put myself in the shoes of the doctors, a few lessons that I learned along the way were

Make sure you create references within the physician community and then call up the doctor mentioning the reference. This way the doctor is more than willing to meet with you as the reference will be either her/his friend or colleague. All our 30 doctors on board have come through this route.

Be prepared to wait

I have found the best time to either close my eyes and relax or read a book is when waiting for the doctor. If we were to do nothing, the one hour or more wait would seem like an eternity. I nowadays carry a small planner and also use that time to jot notes and plan for the next day.

Practice this art. We have found many a time when doctors have been extremely busy spending quality time with us. Doctors tend to pour out their achievements and frustrations. This is because for most of their lives they are only used to hearing from the other side, their patients and do not get to talk much. When you listen not only with your ears but with your heart and mind the meetings are much longer, more productive and more often results in a sale.

This is truer in the health care industry than with any other. At the end of the day, health care revolves around sick people and sometimes the negativity, helplessness, despair and pain around you can get on to you. If your doctor can be optimistic within this surrounding and go ahead to buy your product you better be!!!

IF YOU ARE NOT GOD, EXPECT YOUR DOCTOR TO BE NOT THE ONE 🙂

Did you have similar experiences? Would love to hear your views and comments on the same…

Ranjit Kovilinkal is the Co-Founder of #myhealthvalet, a #healthcare product start-up whose mission is to become the online healthcare registry of India and to make every individual have access to a health account.